THIS PAGE IS GOING TO GO THROUGH MANY REVISIONS AND ADDITIONS IN THE NEAR FUTURE. 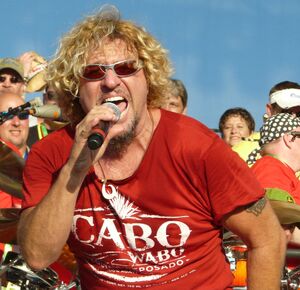 Sammy Hagar is a singer, guitarist, and songwriter.

The Fabulous Catillas formed in 1967.

The Johnny Fortune Band formed in 1968.

He was in the band Justice Brothers circa 1971.

Bob Anglin and Jeff Nicholson were later in the band Squeeze.

Reportedly, he was then in a band featuring all of the Justice Brothers members except drummer David Lauser, with drummer Denny Carmassi in David Lauser's place. (Note: David Lauser has denied this. This section may be removed in the near future.)

He co-founded the band Montrose with Ronnie Montrose, Bill Church, and Denny Carmassi circa 1972/1973. For more information on Sammy Hagar with Montrose, follow the link to the Montrose Wiki in the previous sentence.

He started his solo career circa 1975. This is the part of his career this wiki is primarily about.

He released his first solo album Nine on a Ten Scale in 1976.

He released his second solo album Sammy Hagar in 1977.

He released his third solo album Musical Chairs in 1977.

He was in the band Hagar Schon Aaronson Shrieve circa 1983.

Sammy Hagar and the Waboritas

He co-founded Sammy Hagar and the Waboritas with Vic Johnson, Jesse Harms, Mona Gnader, and David Lauser in 1997.

With Sammy Hagar and the Waboritas

With Sammy Hagar and the Waboritas

Community content is available under CC-BY-SA unless otherwise noted.
Advertisement